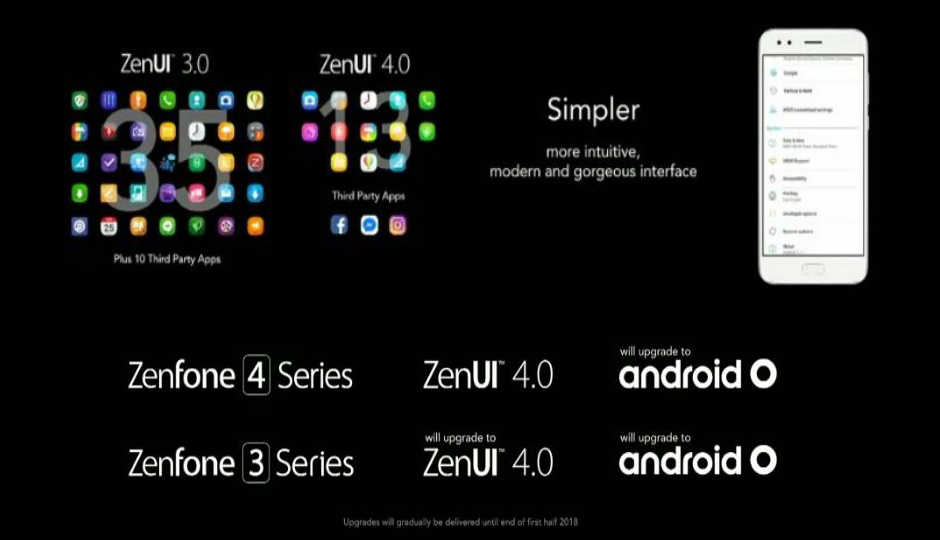 Asus ZenUI 4.0 drops pre-installed apps for streamlined user experience and performance boost. The company says the ZenFone 3 and ZenFone 4 series will be updated to Android O in the second half of 2018.

Asus is the latest Android OEM to cut blotware and streamline your own software. In addition to the launch of the company’s new ZenFone 4 series, Asus has introduced new software called ZenUI 4.0, which removes duplicate apps and other bloatware that affect the functionality of the device.

As the Android Authority notes, ZenUI 4.0 comes with only 13 pre-installed apps, as opposed to the 35 apps found in the old ZenUI 3.5. ZenUI 4.0 also bundles Facebook, Facebook Messenger and Instagram, which most smartphones will download to their devices. The visible advantage will be in the form of speed increase and a non-stop experience across the user interface.

Asus claims that the new ZenUI 4.0 offers anywhere between 34 to 61 percent performance increase compared to its predecessor. The new ZenUI 4.0 also enables twin apps, allowing users to add up to two social media accounts on one device. As Asus streams much of its software, the company sees a reason behind creating its own bookmarking app called Page Marker.

Asus, however, is not the first Android OEM to streamline its own skin built on top of stock Android. During the launch of the Galaxy S8, Samsung streamlined its TouchWiz UI by removing duplicate apps and switching to default apps for general applications. LG has also tweaked its software with the launch of UX 6.0.

Although Chinese smartphone makers have seen the benefits of customizing their software, Lenovo recently dropped its Vibe UI altogether for stock Android. This step will benefit companies with the development and deployment of the latest Android version. According to the updated numbers, Android Nougat is present in only 13.5 percent of the active devices more than a year after its launch.